The world has changed significantly for most manufacturing companies as a result of the recent Covid-19 pandemic. Few business leaders imagined where we would be at today. At times like this, fearless crisis leadership is required to provide good decision making, strategy and actionable plans. The ‘new normal’ can be viewed through the lens of pessimism or optimism. Fearless leaders are viewing this as an opportunity rich environment rather than a doomsday scenario.

Gears & Gadgets is dedicated to the growth and success of our local manufacturing companies by being flexible and responsive to ever changing business environments. We normally host a meeting at a local hotel followed by a casual and fun reception, but due to the COVID situation we changed our format to a virtual Zoom program for our May program. We engaged a panel of manufacturing leaders to discuss the topic of ‘Fearless Crisis Leadership in Manufacturing’.

The response to our new format was fantastic with over 100 Gears & Gadgets members who registered and participated. Our panelists provided real life examples of how they fearlessly led their companies through this crisis with time for participant Q & A.

You are invited to view the program and share it with others in your network: https://bit.ly/2Ym7frm 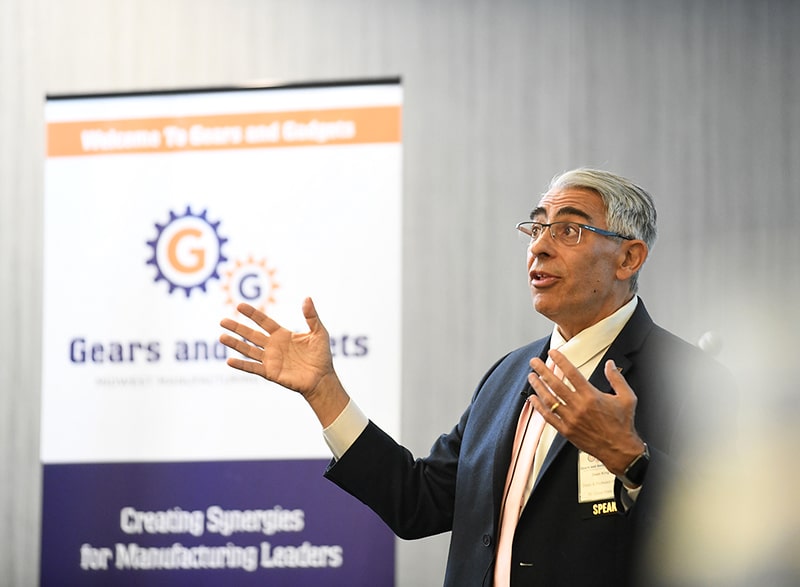 Manufacturing, Trade and Growth in Minnesota - The Outlook for 2020

Our February Gears & Gadgets featured Dr. King Banain, Dean of the School of Public Affairs at St. Cloud State University. Dr. Banaain provided us with 2020 economic forecast for manufacturing. In a prescient move, he discussed the China trade deal and the potential impact the Coronavirus might have on the economy. He advised manufacturers to prevent and contain (including third party suppliers), monitor, diversify and HAVE A PLAN! Gears & Gadgets hopes that our attendees took his advice to heart! Dr. Banaian discussion about the coronavirus starts at the 35 minute mark in this video with the accompanying slides on number 17. 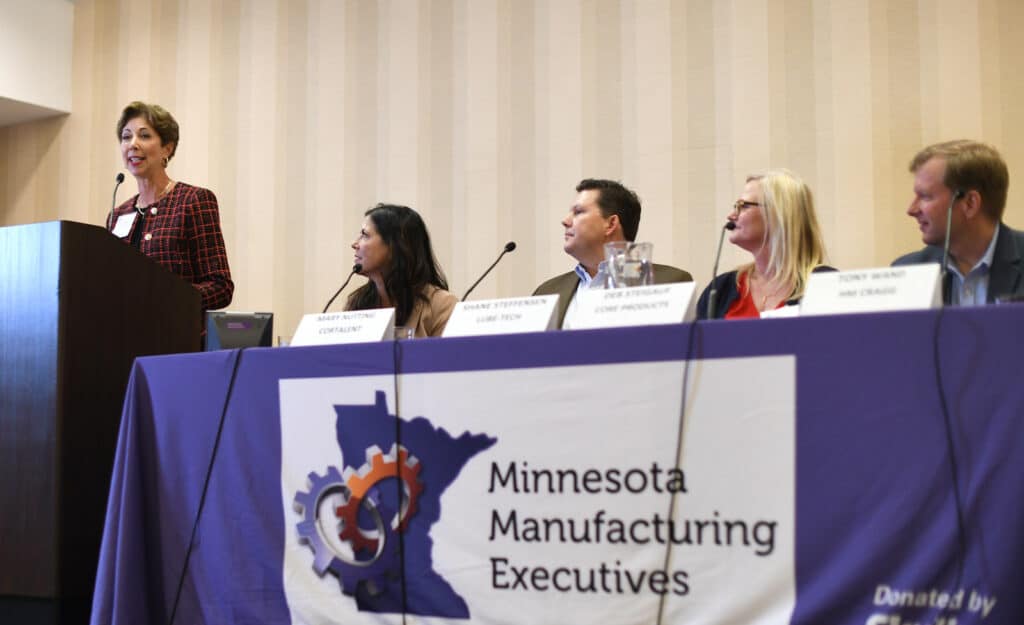 Many companies begin the annual planning process by deciding on which of the primary annual initiatives the organization can focus on to drive growth. Whether you have those initiatives identified or not, this panel discussion can help you understand how the Entrepreneurial Operating System® (EOS®) identifies upcoming opportunities (and risks) you need to be aware of. Panel experts will provide a holistic understanding of why they believe EOS has been key to improved business plans and increased positive results.

Recap of May Gears & Gadgets Event 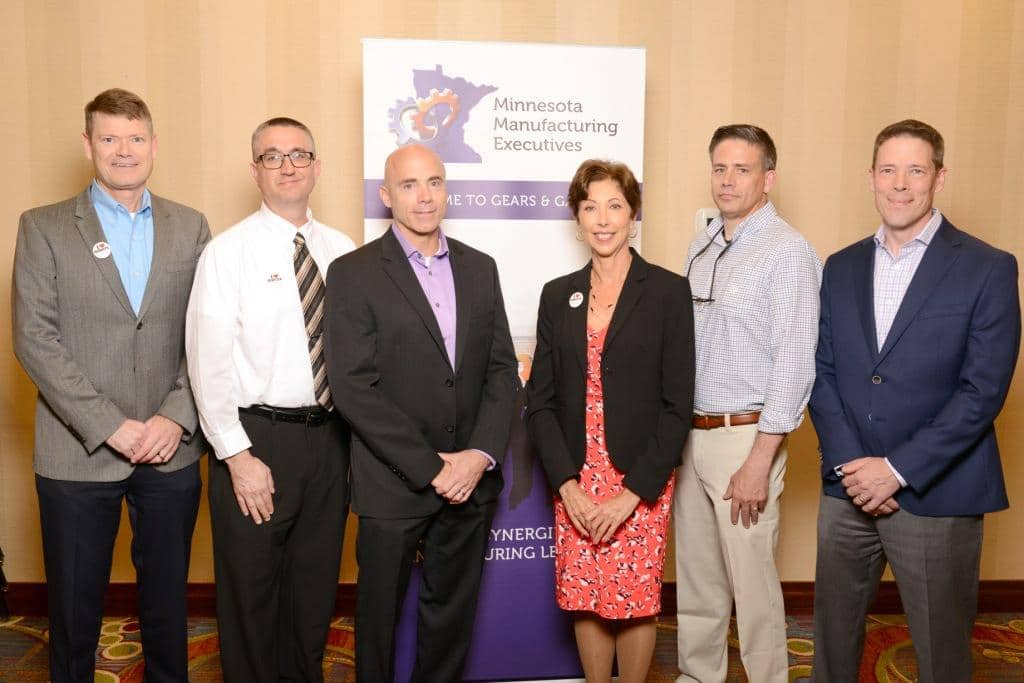 Pew research tells us that even though there is a fast uptick in automation, over 70% of American’s are still wary and concerned about robots in our workplace replacing American jobs. Our May Gears & Gadgets features a panel of manufacturing business owners and robotics experts who will discuss the role of robotics/automation and provide valuable insights from their own experiences. 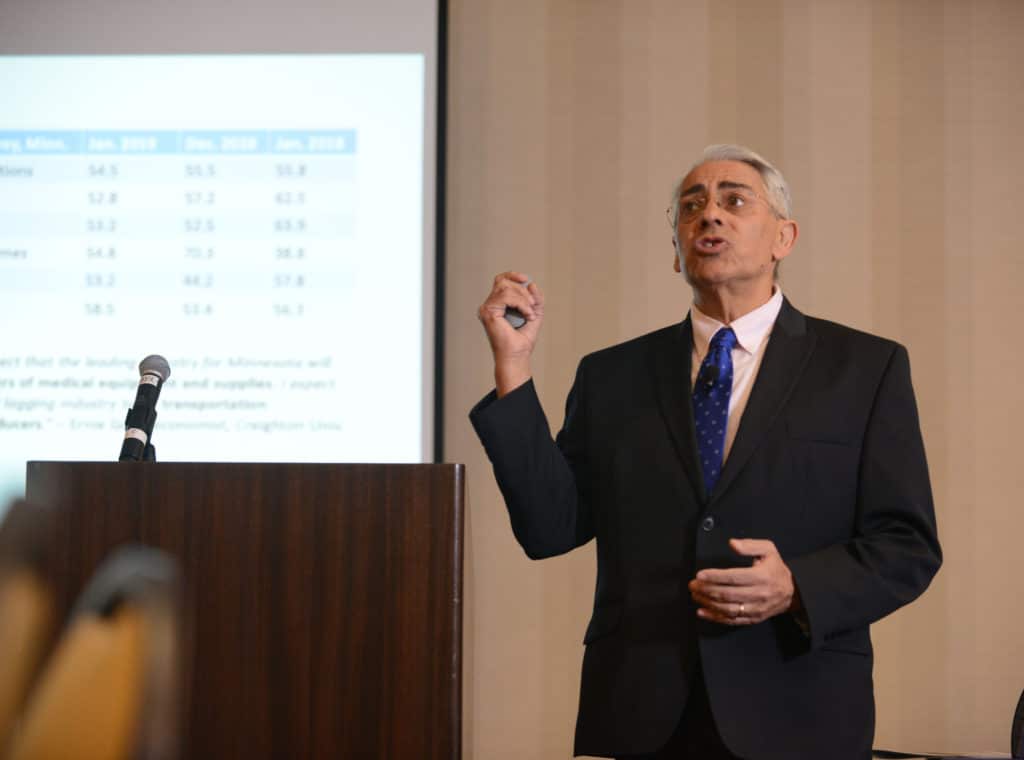 Back by popular demand for the third year in a row, King Banaian, Dean of the School of Public Affairs at St. Cloud State University and longtime economic forecaster was our speaker at the Gears & Gadgets 2019 kick-off program. Despite the dicey winter weather, sixty manufacturing professionals gathered to hear Dean Banaian’s economic predictions for our manufacturing community. Economies do not develop new areas of specialization randomly; they build new industries that use the skills and assets used by existing ones.  In this edition of his annual forecast to Gears and Gadgets, Prof. Banaian took a look back not just at the last few years but offered a longer view of what made Minnesota and the Twin Cities what it is, how manufacturing developed around the state and the skills that are the competitive advantages of its workers.  Dean Banaian provided data and a prediction on where the next boom in Minnesota manufacturing may occur, and what this means for the next 12-24 months.

View Dean Banaian’s presentation and the video from the program.

Click here now to view our Photo Gallery from Feb 2019 Gears and Gadgets with King Banaian. 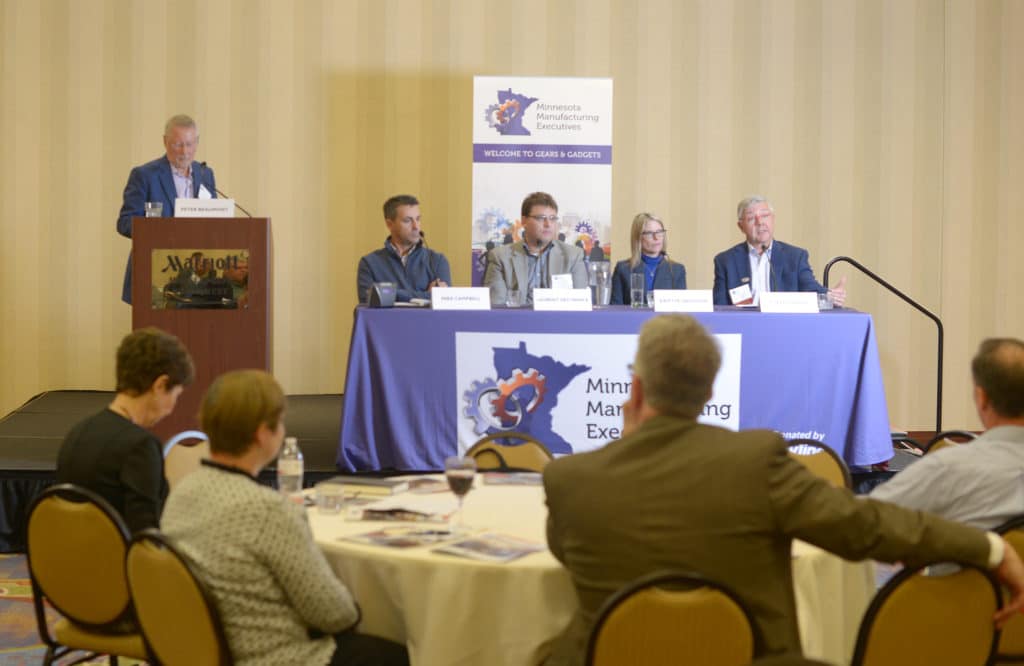 Gears & Gadgets honors the finalists and winners of the
Minnesota Business Magazine–Made in Minnesota Manufacturing Awards.

In October of 2018, Gears & Gadgets honored the finalists and winners of the Minnesota Business Magazine – Made in Minnesota Manufacturing Awards. From circuit boards in space to snowmobiles on the tundra, products made in Minnesota have been changing how we view the world. They can be found in operating rooms, kitchen pantries and office cubicles and on construction sites, world-class athletes and railroad tracks.

We selected four winners and finalists to participate on a panel where they shared their ‘secrets of success’ and ‘lessons learned the hard way’.

Enjoy the pictures from the Event: October 2018 Event

The signature event was held on a ‘weather perfect’ July evening. 80 manufacturing business owners, Executives and Platinum Sponsors kicked back and relaxed on the Bauhaus covered patio on a warm July night while enjoying a delicious BBQ dinner and tasty craft brews while catching up with their industry peers. If you haven’t experienced a Gears & Gadgets ‘Brews & BBQ’ yet, what are you waiting for? Just email Marni Hockenberg at marni@hockenbergsearch.com to be invited to the 2019 party. We’d love to see you!

Enjoy the pictures from the Brews &BBQ: https://nancykuehn.smugmug.com/Events/2018-Gears-and-Gadgets-at-Bauhaus-Brewery/n-FSWv7n/

According to a recent study by Catalyst, a non-profit organization dedicated to expanding opportunities for women in business, it was found that Fortune 500 companies with a high percentage of women officers had a 35 percent higher return in equity and a 34 percent higher total return than companies with fewer women executives. Across the total U.S. labor force, women earn more than half of the associate’s bachelors and Master’s degrees. Once in the workforce we are advancing in our careers, holding more than half of all U.S managerial and professional positions – except in manufacturing. This shows that not only is it the right thing to do to diversify our workforce by hiring more women, it also makes economic sense.

We posed the following questions to our panel:

Our panel provided some tips to attracting, retaining and promoting women:

What does 2018 hold for the manufacturing world?

Looking back at 2017, Banaian recalled how he was cautious of the optimism in manufacturing following the November 2016 election. Now, however, he acknowledges that optimism was well-deserved — 2017 turned out to be a profitable year for Minnesota business owners.

Banaian also believes there is positive momentum going into 2018 for most of Minnesota, with favorable leading indicator data: Employment is up across the state and the number one thing people want to talk about is finding qualified workers. He asked for a quick show of hands among the guests in the room, which confirmed that the majority of the manufacturing attendees are also concerned with finding qualified workers. Much of the meeting was spent discussing the labor shortage and the opportunities and challenges that business owners face. One interesting insight he shared was that for every five workers that travel from St. Cloud to the Twin Cities, there are four that reverse commute from
the Twin Cities to St. Cloud. Both areas are trying to pull workers from other parts of the state.

Of course, Minnesota is used to being at the top of lists, and once again we rank second for the highest state workforce participation. Data also show that there are more people contributing to the labor force aged 65 and older than ever before. Banaian commented that, “people are getting healthier overall due to health technologies and are able to work longer.” He also shared that in Central Minnesota, more than half of workers are over the age of 55 and a little over a quarter are in the Twin Cities. For this reason, the retiring workforce is greatly concerning for more than one in five companies in Minnesota.

So with a labor shortage what are businesses to do?

Banaian shared what companies across the U.S. are doing. One example given was replacing workers with machines. “We’re seeing this in the oil fields where workers are being replaced with machines named ‘Iron Roughnecks.’”
He also pointed out that companies are replacing workers with robotics that can do repetitive tasks, such as Deere’s Cotton Stripper or Lidar robots that act as site inspectors on construction sites, taking measurements and identifying problems immediately after something has been built, saving millions of dollars. Bossa Nova robots at Wal-Mart, he noted, perform inventory control, making employees’ jobs easier. But not all workers are happy about machines
in replacing workers. In radiology, AI can see patterns in the 1,000 of images they are looking at which is a growing concern for radiologists who review images.

Will the reliance on machines to address the labor shortage mean that jobs will be lost in the U.S.? Banaian believes that machine automation will take time. There are still a lot of things a human needs to do as part of the overall process so machines are a supplement not a replacement. Wrapping up the meeting, Banaian discussed data points to consider when thinking about 2018. He shared data showing that commercial lending has slowed down in the last two years but didn’t expand on why it has slowed down and indicated there could be a number of reasons. Interest rates have risen over the past five years and the dollar has depreciated over the past year while the price of gold rose. Based on the data, lending is not increasing too quickly and the dollar isn’t rising which would indicate to him that inflation isn’t coming anytime soon.

He also offered some advice when thinking about this data — or any data.

“We look for data that confirms our prior beliefs. When we see data that doesn’t mesh with us, we push back on it. We don’t want to believe it. We lose perspective. Be curious about your numbers and ask questions.” He went on to say, “If what you are doing is keeping you up at night, please stop what you are doing.”

Banaian concluded the presentation sharing that tax changes and deregulation could keep the good times rolling, and anticipated that the 2018 economy should be just as good as 2017.

“We’ll have to see what the stock market swing means, but right now there is not enough information. This year holds a different set of unknowns from last year”. Written by Megan Effertz, Executive Editor of the Minnesota Business Magazine